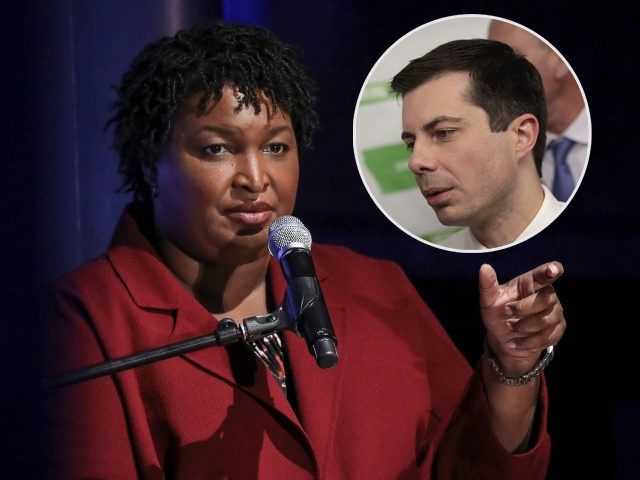 Failed Georgia Democrat gubernatorial candidate Stacey Abrams on Wednesday called on Democrats to embrace identity politics in an apparent swipe at 2020 Democrat White House contender and South Bend Mayor Pete Buttigieg, who previously warned the race-obsessed style of politics is contributing to a “crisis of belonging.”

In her remarks before the Center for American Progress’ Ideas Conference, Abrams said definition “identity politics” had been maligned by people motivated to suppress emerging minority voices from participating in the political process.

“When I hear Democratic candidates, progressive candidates, American candidates decrying the identity of their voters, I’m deeply worried for our democracy,” she stated.

Abrams, who has yet to rule out a campaign of her own for the presidency, did not mention Buttigieg by name. The South Bend mayor told a prominent group of LGBT rights activists earlier this month that a “crisis of belonging” in the United States is exacerbated by “so-called identity politics.”

“The wall I worry about the most is not the president’s fantasy wall on the Mexican border that’s not going to get built anyway,” the 37-year-old presidential candidate continued. “What I worry about are the very real walls being put up between us as we get divided and carved up.”

“When an auto worker, 12 years into their career, is no longer sure how to provide for their family, they’re not part of the country we think of ourselves as all living in together. That’s why we can’t seem to get on the same page,” he added.